The Tour de Yorkshire is a legacy bike race which was introduced after the region hosted the start of the Tour De France a few years back. This is the 4th year and this year it was bigger than ever expanded to 4 days and the ladies race expanded to 2 days. I’ve gone to watch every year but this year decided I’d volunteer to help and become a Tour Maker.

This involved an afternoons training finding out about the role and picking up my uniform. There are 2 main roles for Tour Makers, a general friendly face for the public helping with information and keeping an eye out for possible hazards to the riders and spectators, or a whistle and flag marshal who basically stand in front of a potential hazard in the road such as a bollard or roundabout and make sure the cyclists are aware of it. Being my first year I thought I’d just go for the general smiley face role but was then asked to take on the flagging role so why not.

So kitted out in my hi-viz jacket and armed with my flag and whistle I took my position in the middle of the road and awaited the race. It’s quite clear when the race is heading your way, the TV helicopter is the first visible sign and then the police motorcyclist start pouring past and it’s time to blow the whistle and wave the flag. 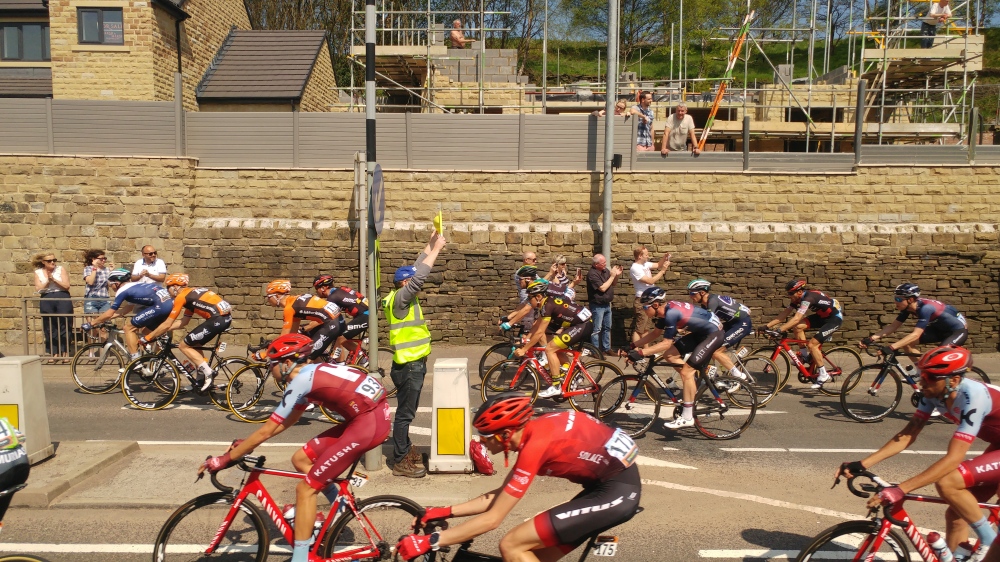 Even though I was very close to the start of the race they hurtle past and the rush both of the air, dust and adrenaline are amazing and then whoosh it’s all over. The cyclists had another 5 hours of tough Yorkshire terrain to cover with a very worthy winner Stephane Rossetto who was king of the road. He broke away with over 100km to go and stayed in front till the finish. A magnificent performance in the heat.

I loved it and will definitely be back next year. With over 2.5 million people cheering the race over the four days, it’s brilliant for the region and continues to grow.

One flag marshall was very lucky though only just managing to get out of the way of one of the cars, I’m glad this wasn’t on my patch!!!! Watch his lucky escape here