The King Vulture is found in Central and South America and like all vultures feeds on the remains of dead animals. This one is a resident at the National centre for Birds of Prey in Helmsley North Yorkshire and the first thing that struck me apart from its amazing colours were it piercing eyes.

A large and predominantly white bird, the king vulture has a grey ruff but although the head and neck are bald, the colours on its head are amazing and vary through yellow, orange, blue, purple, and red.

The centre has an amazing collection of birds of prey and has regular flying displays by the residents during the day. Here’s a link to their website Bird of Prey Centre

I didn’t quite get the picture I wanted of a gannet with its beak just breaking the water as it dived for a fish, but I got close.

In this one three gannets all dived close together entering the sea like a poorly synchronised diving team.

Here this gannet prepares to dive

And in this picture one gannet emerges with its prize as another heads down for a fish. 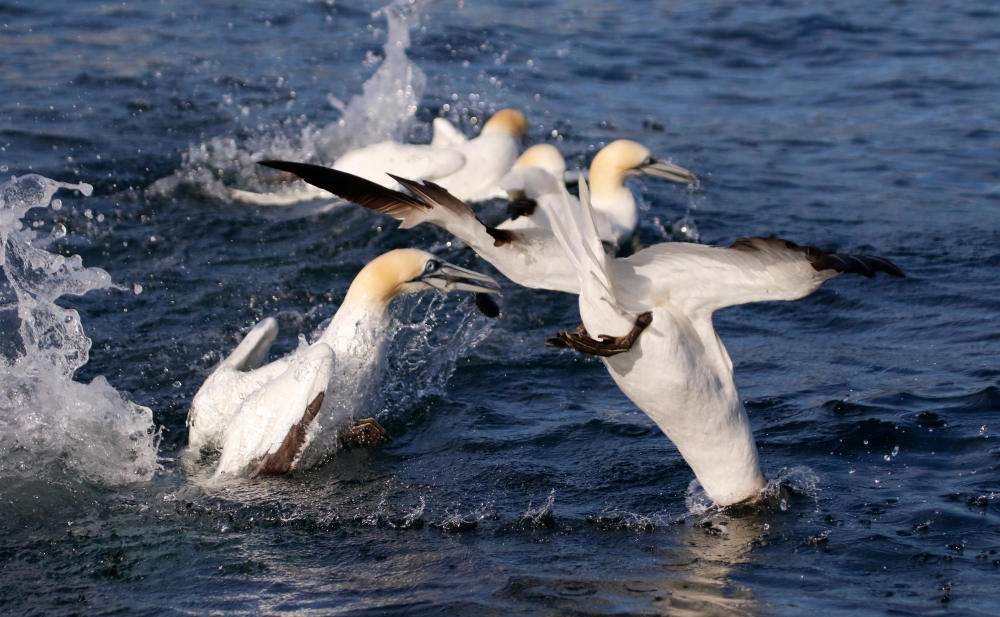 Another day and another trip out, this time on a boat out of Bridlington to photograph diving gannets below Bempton Cliffs. I was due to go on this trip earlier in the year but the sea was too rough so it was cancelled however this time the day dawned bright and clear and the sea was like a pond.

The trip to the base of the cliffs takes about an hour so plenty of time to relax set up the camera and watch the world go slowly by. The boat is stocked with 6 or 7 cases of mackerel which are the chum to lure in the gannets. As soon as the boat is in position the first gulls arrive and greedily grab the first few fish. 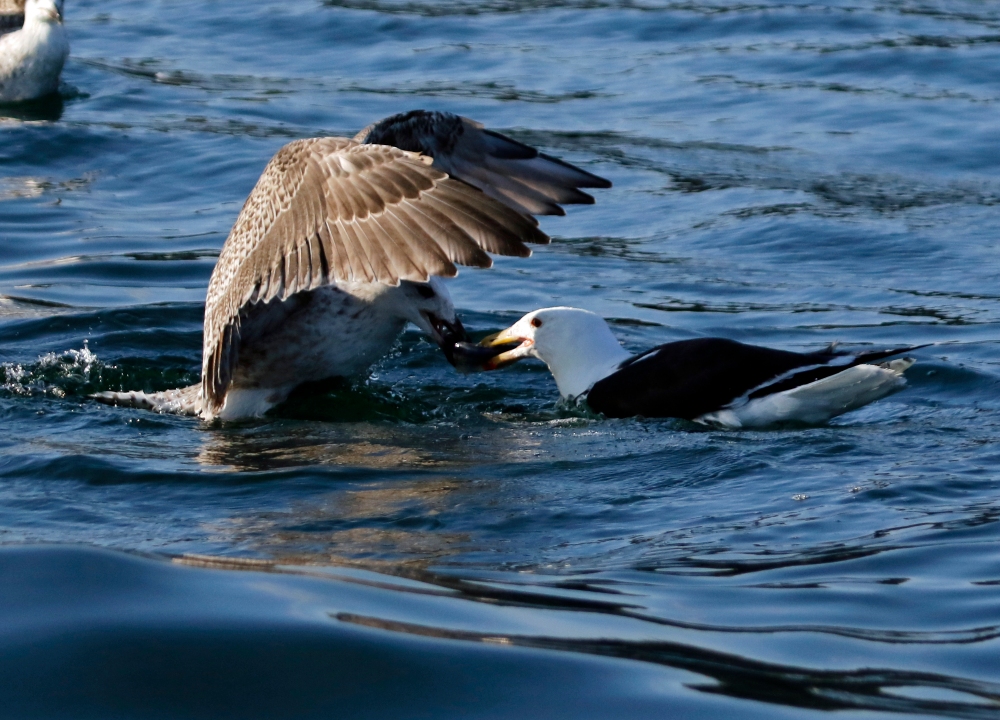 However within seconds the boat is surrounded by a cloud of wheeling gannets who rotate around the boat looking for their chance to dive and grab a fish. They can hit the water at up to 60mph to snap up the fish and it soons becomes an absolute frenzy of gannets arriving at all angles.

As soon as one emerges fish in beak, it is assailed by others looking to steal the prize.

It really is a scene of complete mayhem and great fun to try and photograph. No big long lens needed here as the birds are often close enough to touch and getting wet is part of the thrill. Watching the circling throng lining up their dive, then following them as they plunge into the sea is a joy to watch. 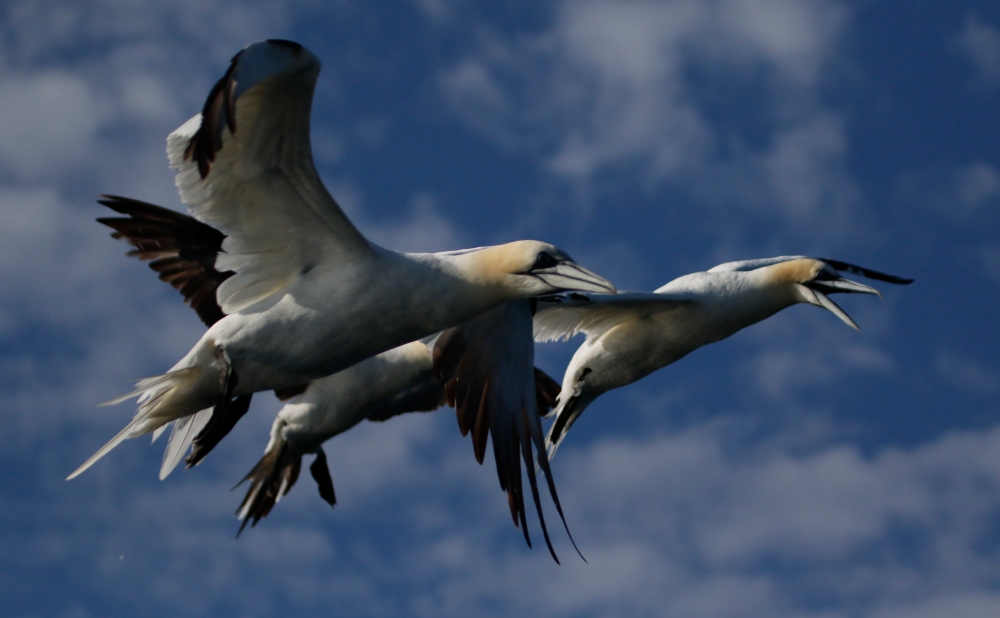 The madness continues till all the fish have been cast over the side and a sense of calm finally returns as the gannets move off looking for another meal or just to float on the waves. If you’re ever in Yorkshire I would highly recommend the trip, 3 hours on the North Sea with an hour in the middle of just pure gannet bedlam.

Lets hope these guys do as well 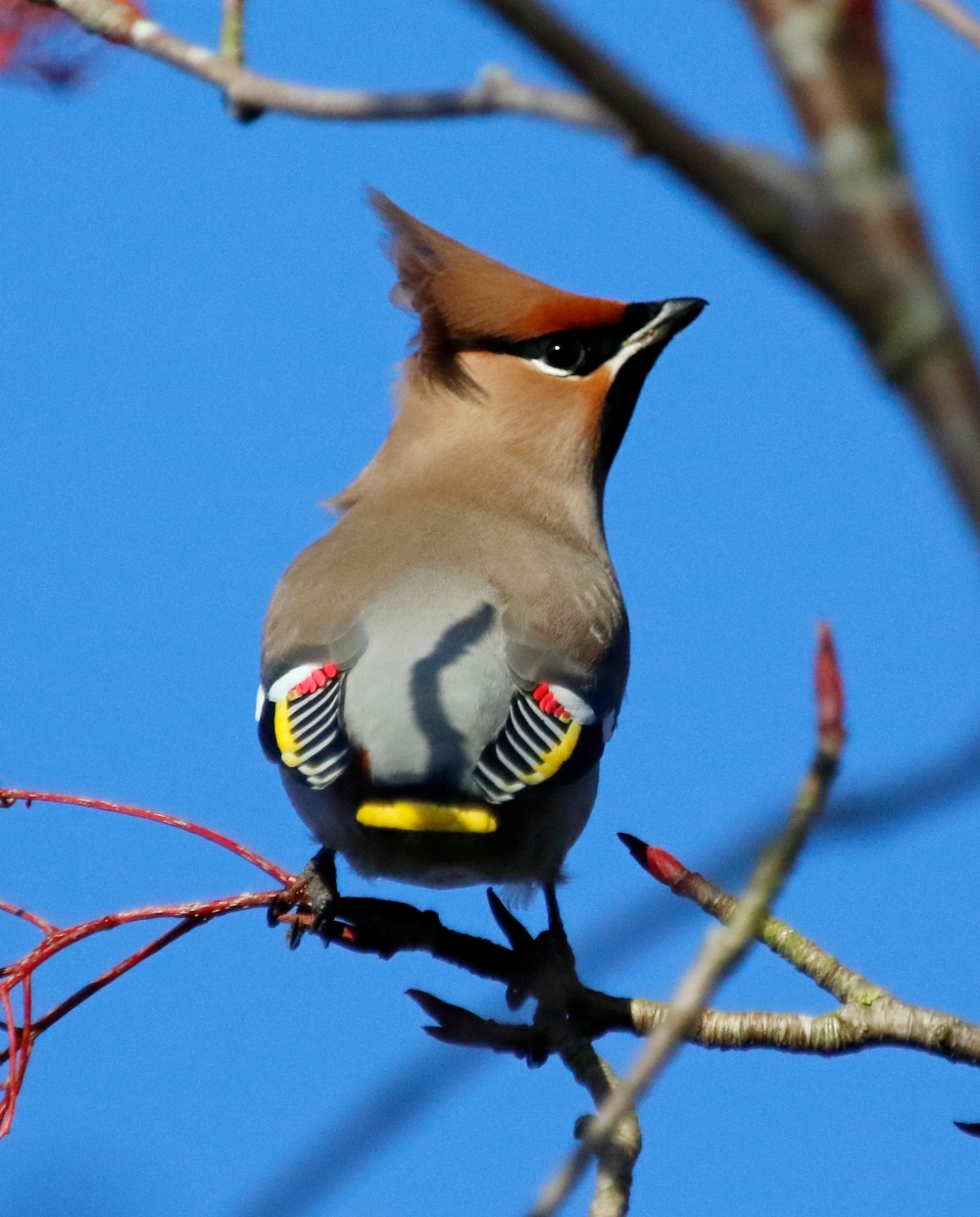 On a recent visit to the East coast I stopped off for a brief visit to the nature reserve at Top Hill Low. I’d only ever been once before and that also was a very quick visit. I will one day get back for a proper day out. 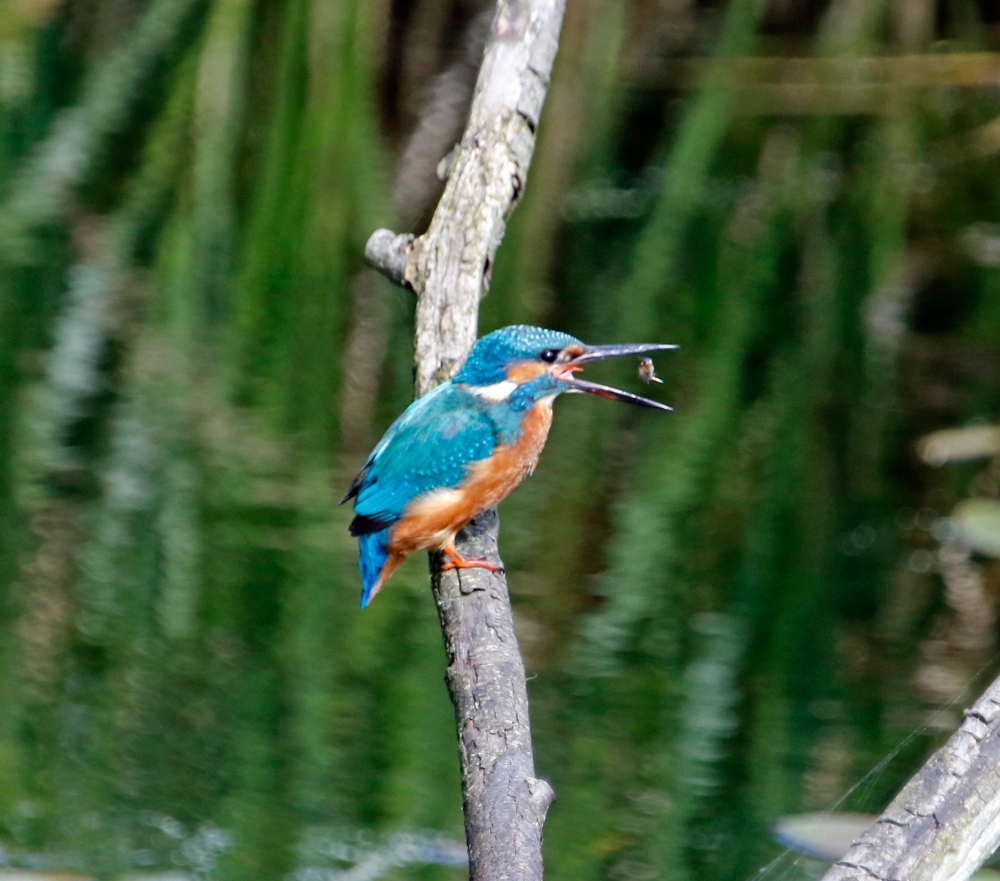 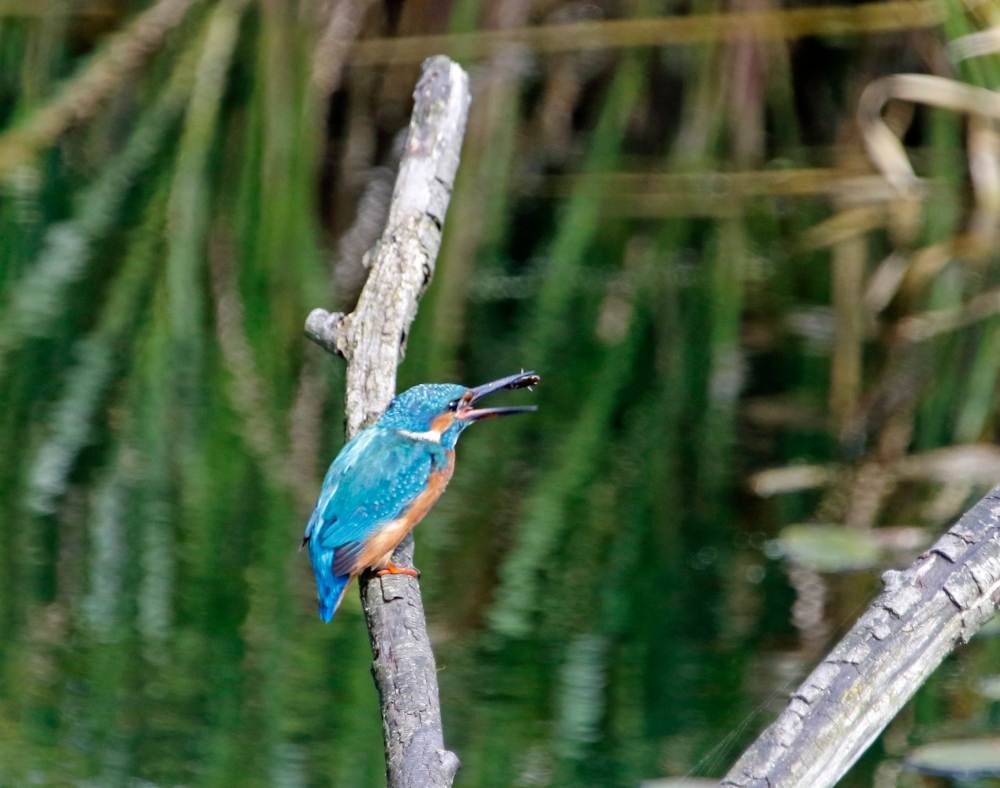 My small flock of sparrows which visits the garden feeders has blossomed from 6 to over 20 regularly coming in for a feed. This is good news for a bird which has been in decline over recent years and they are regularly joined now by up to ten starlings another bird which has been suffering falls in numbers. The sparrow flock was also joined recently by a summer visitor who seemed to have joined the wrong crowd. This juvenile willow warbler has been a regular visitor and always arrived with the sparrows. It’s the first one I’ve ever seen in the area as they are

usually more of a woodland bird and we are a mile away from the nearest wood. Beautiful to see, but I do hope it remembers its not a sparrow and manages to migrate before the weather changes. The tits are starting to re-visit the feeders with coal, great and blue tits all enjoying the nuts and fat balls. Hopefully they’ll keep me entertained throughout the colder months.

After my last exhibition I decided to treat myself to a day photographing kingfishers with Steve Race of  Yorkshire Coast Nature.  As you know I’m a bit obsessed with them so nine hours in a hide watching and photographing them seemed like a dream day out.

Now for whatever reason I’d just assumed it would be a day in a hide beside a lake frequently visited by kingfishers, so I was a little concerned when I arrived to see an artificial perch above a large black tank full of small fish. I’d read about these set ups and how in the past birds had been injured diving into glass tanks they basically couldn’t see. Steve noticed my reticence and we had a quiet chat with the owner of the hide to put my mind at rest. He explained why they used a black tank, where the bird was nesting, how many young they’d fledged over the years and how the welfare of the birds was paramount to him and to his business. They put my mind at rest but I was quite prepared to walk away if I thought there was any threat to the safety or well being of the birds. I joined the other clients in the hide and even before we’d had time to sit down the male arrived for the first fish of the day. He’d obviously been waiting for us to stop chatting so he could start fishing. 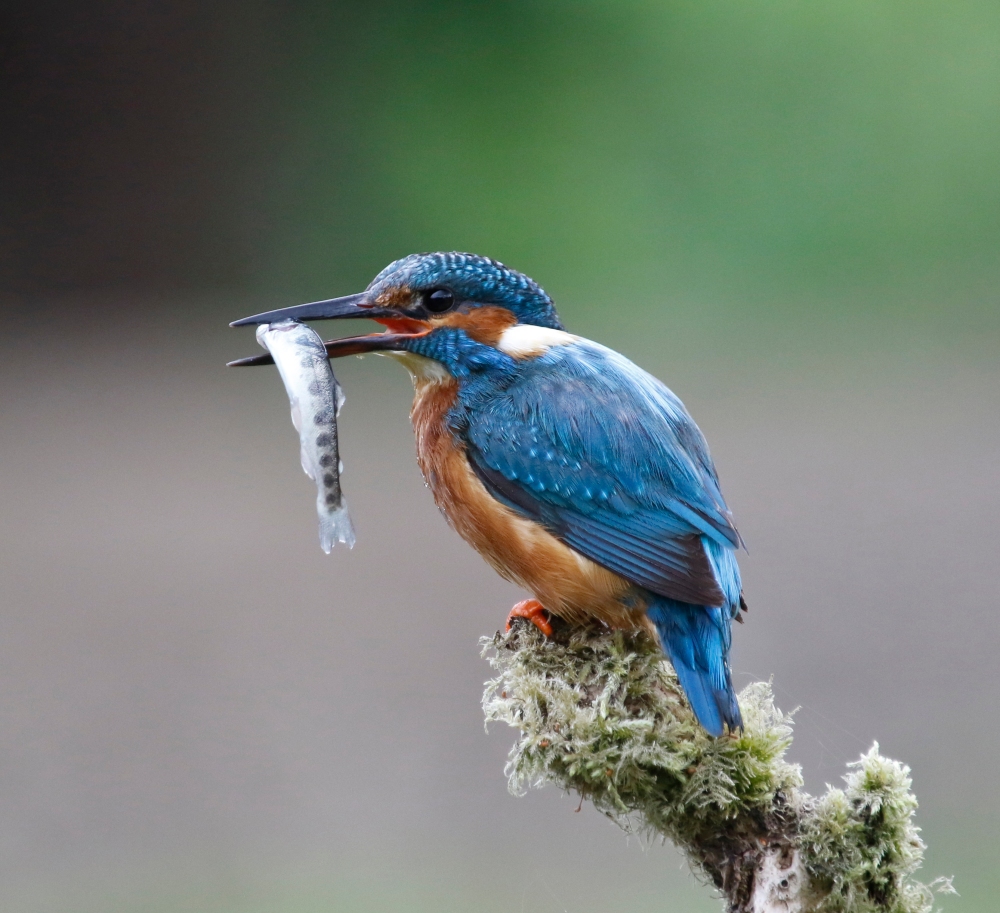 The male continued to come in at an amazing rates of knots grabbing a fish, bashing it on the perch and flying off to the nest. Unfortunately the female hadn’t been seen for four days and it was thought that she may have been grabbed by a sparrowhawk or another predator. However the male was doing a brilliant job of feeding the young and in one ten minute period caught seven fish which were all flown back to the nest. It was a couple of hours before he stopped and ate one himself.

I’ve spent hundreds of hours watching and photographing kingfishers in the wild so I know about the patience, skill and luck needed to get decent images. I can also see how days like this have become established and are allowing photographers not only the chance to see these beautiful birds so close but to also capture them doing what they do naturally although in a slightly contrived atmosphere. 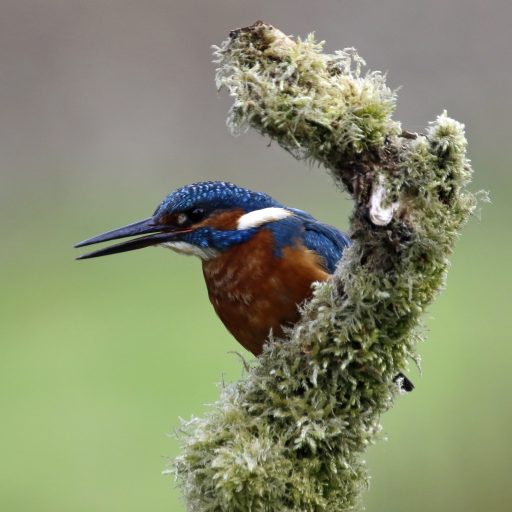 Is it ethical? To start with I was very skeptical, however Mark the site owner has been managing this lake and photographing the kingfishers for a number of years now. It was obvious that this kingfisher was doing a superb job providing for its family apparently on its own. And at the end of the day how much different is this to hanging out feeders in your garden for your local birds, or an RSPB nature reserve specifically managed to attract as much wildlife as possible, or Springwatch putting out carcasses to attract predators they can film for our entertainment.

It also led to an interesting debate in the hide on my recent day photographing the ospreys fishing. One of the other visitors just couldn’t understand that there was no difference between a pond specifically stocked with fish to attract ospreys and a tank stocked with fish to attract kingfishers, even when the pond owner explained that the pond was drained and cleaned and the fish removed as soon as the ospreys migrated South.

In the end I had a fabulous day and took probably the best shots I’ll ever get of my favourite bird but it still it won’t stop me spending hours on the riverbank trying as usual to get just one more.