Last Tuesday I couldn’t really motivate myself after work to go out. I had around 1000 images from my trip to the Farne Islands to review and Springwatch was on. Then the sun put in an appearance so I jumped in the car and went down to see if the kingfishers were around.

For some reason I decided to sit up above the river rather than in my normal spot down on the bank to try and get a different viewpoint. After about half an hour with only a couple of grey wagtails flitting about something moved in my peripheral vision. When I latched on to it it was disappearing into the undergrowth on the far bank. It didn’t look like a duck and I could see it moving towards my viewpoint by the movement of the vegetation. I’d decided it was probably a mink and concentrated on the spot I thought it would emerge. Sure enough it appeared but it wasn’t a mink it was an otter, the first I’d ever seen in the wild. It skipped from cover and as I began to take pictures I think it sensed it was being watched. It stopped, stared directly at me and then gracefully entered the river and vanished upstream in a curtain of silvery bubbles.

I’m so glad I decided to go out! I’m still working through the thousands of pictures I took on my visit to the Farne Islands and I will write some detailed blogs soon. However this week I was distracted by my first OTTER and a Fathers day trip out. Hope you like this weeks photos Click here for the pictures.

I’ve just updated this weeks photo’s on my website. I had a brilliant weekend in the Farne Islands which is a seabird hot spot and I’m still ploughing through the couple of thousand images I took! Just click here for This weeks photos

I’ve just updated the photo’s on my site. Spent a lot of the week watching the kingfishers and taking really poor photos!!!! Please pop along and let me know what you think This Weeks Photo’s

A few weeks ago whilst walking the dogs I spotted a Great Spotted Woodpecker in a tree. Normally they fly away or hide around the trunk but this one stayed and then another flew to a nearby branch. Both had beaks full of insects so I backed off realising there must be a nest close by. It didn’t take them long to fly to a tree and one after another disappear into a hole in the trunk which was greeted by excited cheeping.

I began going to the woods on a daily basis and thoroughly enjoyed seeing the parents constantly arriving with food and disappearing with the chicks deposits.

The parents had a routine as the male would perch outside the hole and feed an unseen chick while the female seemed to ignore the dominant chick at the front and would enter the nest hole to feed the other chicks.   After about a week the parents would only feed through the hole, which suggested the chicks were now too big for them to get into the nest and often a small head could be seen bashing away at the food they brought. Finally I began to see the chick peering out at the world and taking food from the parents.

Last weekend it became clear that there seemed to only be one chick left and it was about to fledge. The parents were bringing food but were hanging back from the nest hole and they seemed to be trying to lure the chick out. The male arrived with what looked like a dead chick from another birds nest and would let the youngster grab hold before trying to pull it out into the world. The chick wasn’t playing though remaining firmly in the nest.

Sadly I missed him leave! I returned the next day and all was quiet, no sign of the parents or the chick. Hopefully he left the nest safely and is being helped on his way by the parents. I’ll miss their antics but it was a pleasure to watch. Who knows they may try for a second brood and I can watch it all again. 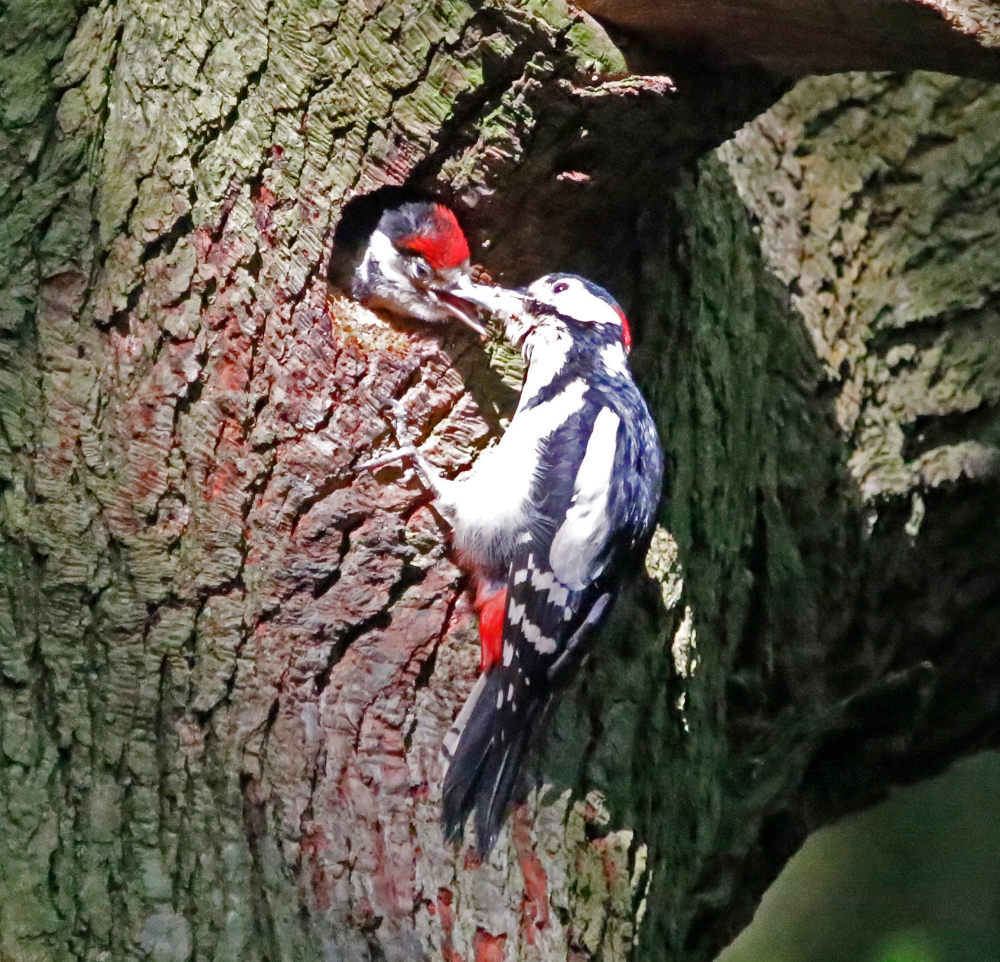