Earlier this week I visited a local nature reserve and had a couple of interesting moments with British wildlife.

I’ve been trying to photograph the Kingfisher for about a year now and although I’ve seen quite a few I’ve never managed to snap one till now. I was the first person into one of the hides and as I entered the first thing I saw was a kingfisher sat on the perch right outside the window. I didn’t want to open the window as I knew it would fly off so I fired off a few shots and was pleasantly surprised with the results and the fact the kingfisher had caught a fish. Not the best shots of this beautiful bird but a first for me and one I can hopefully improve on over time.

Later on I got my first sight of the Bittern which is a quite rare bird in England. Its also a quite strange looking and shy bird which hides in reed birds adding to its elusive nature. The first time I saw it was a quick flight but the second time it was mobbed by black headed gulls and flew directly towards me. I didn’t have chance to change the camera settings so the shots aren’t brilliant but it certainly was great to see the bittern and also the behaviour of the gulls. One of Britains rarest birds being hounded by one of the most common. 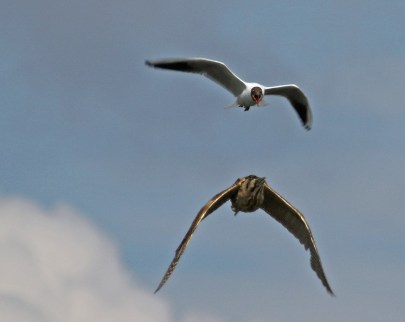